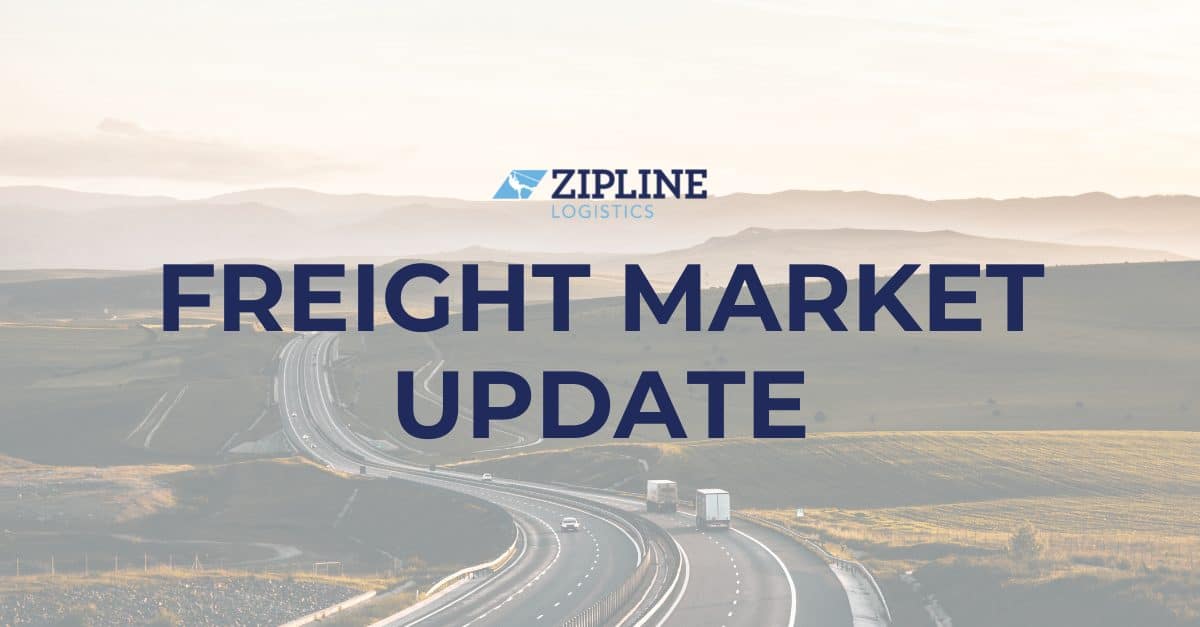 Another dynamic quarter in the freight market has come and gone. In Q3, CPG brands and their supply chains have been impacted by an extremely inflated economy, newly implemented bills and freight regulations, and shifts in retailer requirements.

Here’s a recap of the quarter broken down by these factors and what shippers should expect in the final quarter of 2022.

Experts estimate that nearly the entire U.S. population now has at least some immunity through vaccination, previous infection, or both. In turn, the CDC has ended social distancing and quarantine recommendations.

Although we’ve said goodbye to these precautions (hopefully) for good, there are still lasting effects on the global supply chain. While there has certainly been improvement in each area, neither labor force shortages, nor port backlogs, nor inflation have returned to pre-pandemic levels.

As the war continues to rage on nearly 7 months in, the latest update is that Russia is losing heavily and unexpectedly. Ukrainian forces have recaptured 6,000 square kilometers in the country’s south and east. The big concern is that Russia recently threatened to use nuclear weapons in the fight.

At the beginning of the war, the global economy suffered a knee-jerk reaction that impeded the flow of goods, fueling dramatic cost increases and product shortages. Today, those initial effects are subsiding greatly in the U.S.

AB5 has the potential to destabilize the trucking market in California, which can create a variety of issues for shippers moving freight in and out of the state. Capacity could suffer a blow if a significant number of truckers decide to leave California. Rates could also rise if carrier expenses increase to compensate drivers as full-time employees.

There were owner-operator protests against AB5 in early July, which halted operations at the ports of Los Angeles and Long Beach. There is a strong likelihood that protests of this nature will continue and cause additional supply chain disruptions in the future.

Some experts predict that the major, lasting effects of AB5 will become more apparent in early 2023.

The NMFTA has issued several NMFC changes that went into effect on August 13, 2022. It’s super important to communicate NMFC updates with your organization and prepare accordingly, as these changes affect your shipping class and therefore, your less-than-truckload (LTL) rates.

Large railroad labor unions were poised to go on strike in order to be granted better quality of life conditions, mainly more time off. Some railroads use a points-based attendance system that puts workers on call for 12 hours a day and penalizes them for sick or vacation days.

A strike would have shut down 7,000 daily trains and cause shortages, shutdowns, and price hikes across sectors. This would ultimately cost the economy about $2 Billion per day.

At the time of writing, the strike has been held at bay after a five-year deal was announced. Under these terms, which is retroactive to 2020, workers will receive a 24% pay increase and $5,000 in bonuses. Railroads also promised to ease scheduling policies, but have not offered paid sick leave or more time off.

Ocean shipping rates on major trade routes have fallen by more than half since the beginning of 2022. This is a potential sign of easing inflation pressures and alleviated supply chain backlogs.

Hurricanes are another thing that can affect your supply chain this quarter, especially now as we enter peak months of the Atlantic Hurricane Season.

Although the season was originally off to a slow start, major hurricanes are now beginning to roll in. Hurricane Fiona recently wreaked havoc in the Caribbean, namely in Puerto Rico and the Dominican Republic. Not long after, Hurricane Ian hit Cuba and mandatory evacuations are taking place in Florida.

Regardless of what happens next, it’s critical to explore how you can prepare your supply chain to brace for incoming hurricanes.

Volumes and rejections are both down year over year. Dry van spot rates are flat month over month but down 22% year over year. Volumes are near 2018 levels, which is the lowest they have been since they shot up in 2020 due to the pandemic. Due to strong inventories and a lack of demand, volume is predicted to fall another 5-10% in Q4.

The average rate per mile (RPM) peaked in early 2022 and has been steadily declining since. Heading into Q4, the dry van RPM is sitting around $2.62 and the reefer RPM is about $3.06.

Hot markets include SoCal, the Northeast, and Central Ohio. As Christmas tree season approaches, inbound rates in Washington and Oregon will likely go down as outbound rates go up.

Based on IRI data, the beverage industry was out of stock an average of 12% in August 2022. In just one category – we’ll use carbonated beverages as an example – that equates to $340.41 Million in revenue opportunity cost left on the shelf in just ONE week.

Similarly, the packaged food industry was out of stock an average of 10% in August. In just one category – we’ll use candy as an example – that equates to $343.65 Million in revenue opportunity cost left on the shelf in just ONE week.

Some shippers who already have product order agreements in place with Walmart are frustrated by this change. However, the good news is that CPU is not the only (nor the best) option for shippers anyway. Switching to delivered pricing will be the lowest effort and highest return adjustment you make in 2022.

Especially as the holiday season is approaching, retailers are being picky with the brands they choose to work with. In a survey of retail buyers, 90% said a supplier’s ability to deliver on time impacts their purchasing behavior of that brand and 66% have ended relationships with suppliers over delivery issues.

Navigate the Freight Market with the Best in the Biz

Regardless of an always changing freight market, CPG suppliers focused on logistics partnerships rather than freight transactions will be the real winners in 2022. Believe it or not, there are still many aspects of your supply chain that you can control with industry experts on your side.

We tailor strategies to reduce overall transportation spend, optimize retail performance, and beat out the competition for shelf space. 97% of our orders end up on retailer’s shelves such as Walmart, Costco, Bath & Body Works, Whole Foods, and Best Buy.