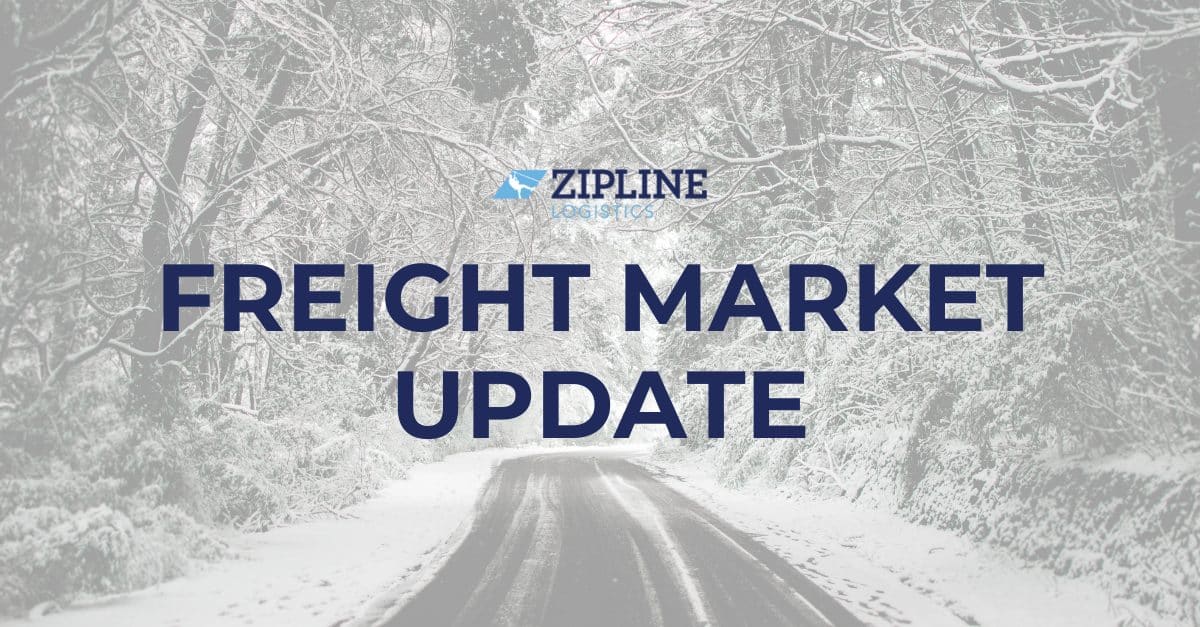 What a whirlwind the 2022 Freight Market was – we saw inflation, fuel prices, and freight rates hit record highs. As we begin the first quarter of the new year, the market is softening and offering shippers relief.

According to Forbes, many inflated costs finally began declining in November 2022 like the price of energy, medical costs, airfares, and used cars. The U.S. inflation rate is sitting at 7.1% as we close out Q4 — which is quite an improvement from the peak 9.1% we faced in June of 2022.

Following November protests against strict COVID-19 policies, the Chinese government relaxed many of its restrictions like mass testing, quarantining in state-sanctioned facilities, and electronic contact tracing and surveillance.

Now there is a giant wave of a COVID subvariant sweeping China. Experts predict hundreds of millions are infected and more than one million have died.

China is the world’s largest producer and exporter of consumer goods. Disruptions across the Chinese manufacturing sector are likely to impact the global supply chain of goods and the world’s economy.

The Russian-Ukrainian War continues to rage on 10 months later.

American businesses depend on Russia and Ukraine for a plethora of commodities. According to data from the Observatory of Economic Complexity, four critical commodities — neon gas, palladium, platinum, and pig iron — are in short supply.

An analysis by SupplyChainBrain estimates these shortages will have a direct impact on approximately 12% of the U.S. economy.

AB5 has the potential to destabilize the trucking market in California, which can create a variety of issues for shippers moving freight in and out of the state. Capacity could suffer a blow if a significant number of truckers decide to leave California. Rates could also rise if carrier expenses increase to compensate drivers as full-time employees.

Most recently, a federal district court in California announced it won’t hold a hearing to block AB5 until May. In other words, enforcement of AB5 will remain in effect until then.

The NMFTA issued several NMFC changes in August 2022. It’s super important to communicate NMFC updates with your organization and prepare accordingly, as these changes affect your shipping class and therefore, your less-than-truckload (LTL) rates.

For the last several months, large railroad labor unions were poised to go on strike in order to be granted better quality of life conditions, mainly more time off. Some railroads use a points-based attendance system that puts workers on call for 12 hours a day and penalizes them for sick or vacation days.

A rail strike could have frozen almost 30% of U.S. cargo shipments by weight, stoked already surging inflation, cost the American economy as much as $2 billion per day, and stranded millions of rail passengers. On December 2, 2022, President Biden signed a bill that blocked a strike from happening.

Ocean shipping rates have cooled from record highs hit during the pandemic. At its peak in mid-September 2021, the average rate to secure a container on a ship from Asia to the U.S. West Coast reached $20,586. By contrast, the average price for a freight container in mid-December 2022 was $2,127.

Carriers will be soon be releasing their first general rate increases (GRIs) of the year. This means they will apply an even percentage uplift to blanket rates to match their increased operating costs. Zipline experts predict GRIs will not be significant as last year’s increases due to the market softening.

As volumes decline leading up to the holidays, carriers are rejecting less tenders in order to keep freight moving before much of the industry shuts their doors for Christmas and the New Year.

The charts above depict national average outbound tender volumes and rejections in the United States. Derived from FreightWaves SONAR.

The chart above depicts national average line haul rates and fuel surcharges for vans in the past 13 months. Derived from DAT RateView.

The chart above depicts national average line haul rates and fuel surcharges for reefers in the past 13 months. Derived from DAT RateView.

Based on IRI data, the beverage industry was out-of-stock on average 11% in December 2022. In just one category – we’ll use juice as an example – that equates to $52.76 Million in revenue opportunity cost left on the shelf in just ONE week.

Similarly, the packaged food industry was out-of-stock on average 18% in December 2022. In just one category – we’ll use candy as an example – that equates to $618.58 Million in revenue opportunity cost left on the shelf in just ONE week.

Even in a soft freight market, retailers are being picky with the brands they choose to work with. In a survey of retail buyers, 90% said a supplier’s ability to deliver on time impacts their purchasing behavior of that brand and 66% have ended relationships with suppliers over delivery issues.

Regardless of an always changing freight market, CPG suppliers focused on logistics partnerships rather than freight transactions will be the real winners in 2023. Believe it or not, there are still many aspects of your supply chain that you can control with industry experts on your side.

We tailor strategies to reduce overall transportation spend, optimize retail performance, and beat out the competition for shelf space. 97% of our orders end up on retailer’s shelves such as Walmart, Costco, Bath & Body Works, Whole Foods, and Best Buy.