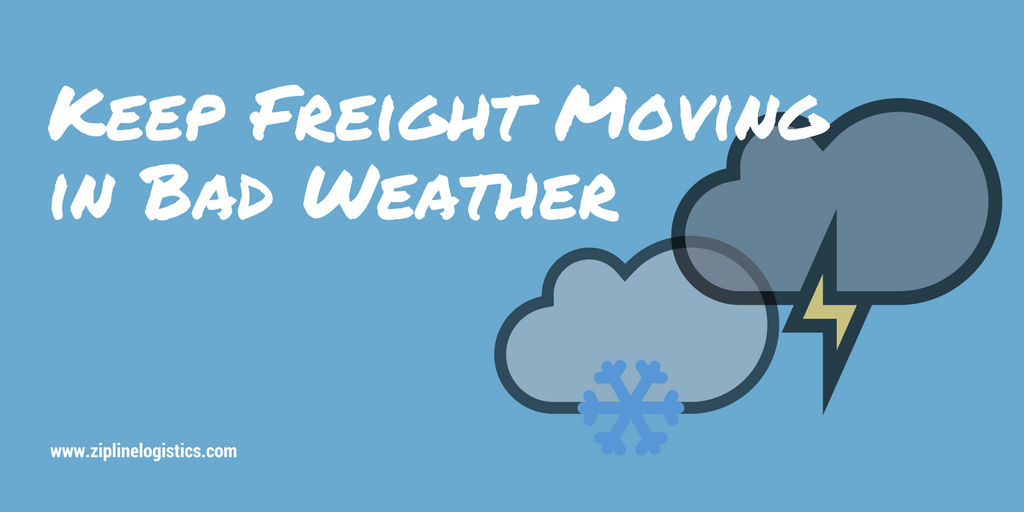 Mother Nature can undoubtedly have dramatic impacts on freight transportation. Inclement weather can force shutdowns or transportation delays, and when unheeded, cause severe accidents.

In 2017, transportation has already been impacted by various weather-related challenges.

Weather delays are inevitable. Particularly since more than 70 percent of the nation’s roads are in snowy regions, as reported by the Federal Highway Administration. So, what can shippers, carriers, and third-party logistics (3PL) providers do to prepare and respond?

There’s no benefit to pretending that weather won’t impact pickup and delivery timelines. Instead, having candid, upfront conversations will lead to better outcomes and fewer surprises. Typically, freight can still be moved during bad weather, but often at a higher cost or with an extended timeline.

Increased communication during a storm can make the difference between a smooth shipment and a late or damaged order. As mentioned above, it’s possible to keep freight in motion during a storm, but it takes some extra work.

Solutions for Transportation Delays from Weather

As soon as a storm or weather threat is announced, determine what orders are critical and which have flexibility. 3PL partners can help quickly manage these changes in freight flows because of their access to a network of vetted carriers. Here’s what to keep in mind when making alterations:

Role of 3PL Partner During a Storm

Throughout a period of inclement weather, your 3PL partner should be delivering on an increased level of customer service. Here are a few things you should expect them to be doing:

Yet even with these proactive responses, sometimes weather still trumps transit plans. States may ban tractor trailers from traveling on highways, a state of emergency may force all vehicles off the road, or downed power lines and trees or car accidents may result in unforeseen congestion.

Your 3PL partner should have an eye on these developments. By talking to carriers, receivers, and other members of their network they can keep you abreast of widespread changes, pivot transportation strategies in response, and provide honest updates on delays.