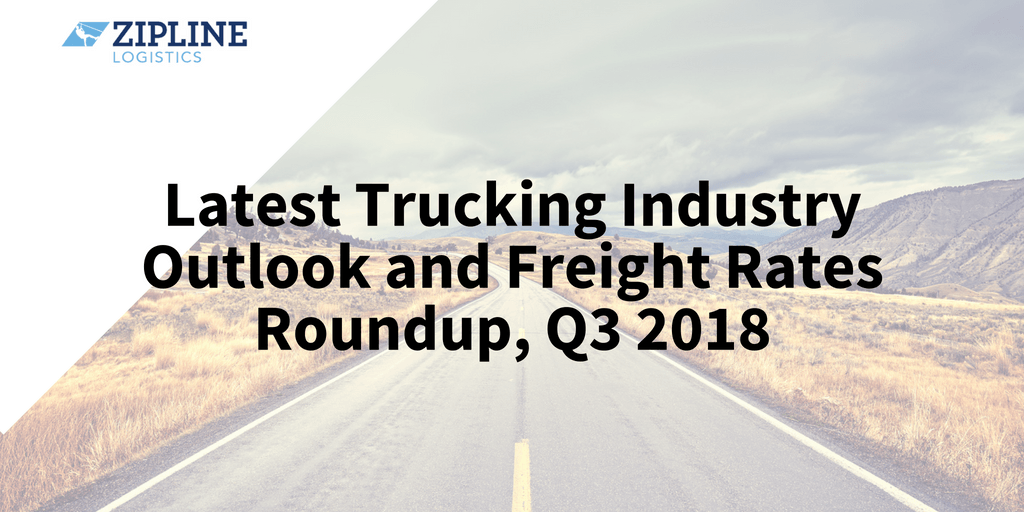 There is a plethora of information out there about the current transportation market and freight rates. To help synthesize the information for our audience, we’ve developed a breakdown of what’s most important, right now.

We’re facing capacity restrictions like those experienced in 2004-2005. But, the issues of the market are not cyclical like they were in 2004-2005, they are underlying and require action. The “rate boom” is not going away anytime soon.

Rates have been on the rise across the board. According to DAT RateView the average national rate for June 2018 hit the highest point ever recorded by their rate monitoring system at $2.32 per mile, which was an increase of $0.52 over the same month last year.

However, the first week of July broke the DAT record again with a national average of $2.45 per mile. This spike in July rates was mostly due to the holiday, as more drivers and dispatchers were off duty which had a significant impact on available capacity.

According to Internet Truckstop, when their market demand index (MDI) is at 12 loads per truck, the market is in equilibrium. When this number is above 12, pricing leverage resides with carriers. Their MDI hasn’t been below 35 all year, and in June was at an average of 66 loads per truck, up 91% compared to the prior year.

Todd C. Fowler of KeyBank Capital Markets Inc. adds, “spot rates remain at elevated levels and are up 23% 2Q18-to-date and 28% year to date with higher freight turndowns, tight capacity, and higher utilization supporting low double-digit increases in contractual pricing.” Fowler goes on to state that market research leads them to expect 3Q rates to increase by about 14% year over year.

As the current pool of available drivers nears retirement, there simply aren’t enough qualified candidates to take their places. One common theme is that the millennials that are currently in the job market are not interested in working long hours and being away from home for extended periods of time. Another factor is the fierce competition to recruit and maintain new employees.

According to the President of Jet Express Kevin Burch, “Turnover is also challenging in the industry, with a turnover rate nearing 100% as truck drivers jump from one company to the next for slightly better pay or an earlier shift.”

Government officials are working on solutions, potentially allowing drivers under the age of 21 to work across state lines under the supervision of more experienced drivers. However, there are no plans in the works that would fully mitigate the crisis any time soon.

Fortune Magazine adds that “…it’s not just because there aren’t enough people willing to drive a truck — there aren’t enough qualified people. The lack of qualified drivers—some trucking companies have complained only 1% to 2% of applicants meet their requirements—has businesses competing for the same pool of workers.”

Adding an unanticipated constraint to the mix, states that have approved the legal use of recreational marijuana are facing their own set of unique issues when it comes to trucking capacity and labor retention. A key LTL carrier executive recently informed Zipline Logistics that drivers and warehouse associates are failing federal drug tests, even though they are legally allowed to use marijuana in their local jurisdictions.

As Produce Season begins to slow down, outbound rates tend to decrease from south to north in the southeastern states. Zipline Logistics’ market lead for that territory shares that, “The southeast has noticed produce in the south and central Florida taper off and move north to the Jacksonville area and all of GA.  By the end of July, we estimate that all of FL will be done shipping produce and it will move up to solely GA, the Carolinas, and TN.”

“This will cause rate hikes on any freight heading back into the entire state of FL but will provide us relief on all outbound FL freight. Capacity for outbound GA, TN, NC, and SC shipments will remain tight while inbound rates should stay on the lower end as people will be looking to head to these areas until the end of August.”

Railroads are already operating at capacity with peak season hitting sooner than normal. Union Pacific’s contractual market is booked up meaning that the UP will not entertain any new business.

Knichel Logistics shares that, “the UP has added 3500 new steel EMP boxes and 2850 chassis to help alleviate the upcoming fourth quarter crush. However, the adding of new boxes alone will not help fluidity. They are also attempting to add crews and train power, yet we anticipate there will not be a lot of relief felt during the fourth quarter despite these efforts.”

The LTL market is also seeing unprecedented volumes. Numerous LTL carriers are issuing embargos, which means they are not accepting new freight in their networks destined to or originating from certain areas.

Capacity for LTL carriers is particularly strained because shippers are breaking full truckload orders into LTL as an attempt to overcome capacity constraints. Some shippers are even splitting larger, volume-type LTL shipments into two separate shipping days. Instead of fixing the problem, tight capacity is just being shifted among different modes.

Advice for the 2018 Transportation Market

It’s time to shed bad habits and bad partners. Today’s market is not “settling down” anytime soon and players need to switch up their strategies if they want to be successful.

Need help with your retail and/or grocery shipments?