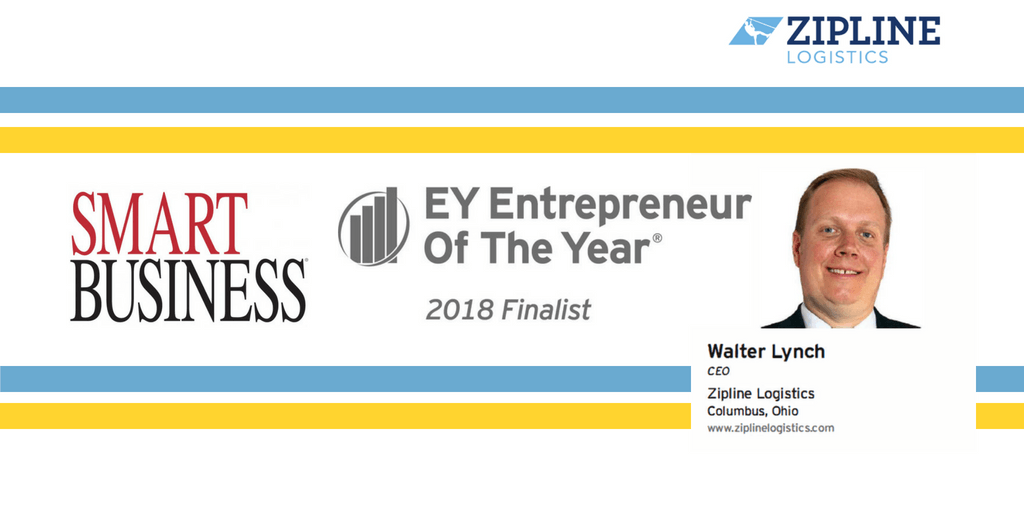 Lynch was selected as a finalist by a panel of independent judges and recognized for Zipline’s dedication to ethical business practices, employee education, and continued company growth. (See the original announcement here.)

An excerpt from the special issue of Smart Business Magazine can be read below:

Walter Lynch comes from a family of entrepreneurs and while he did not expect to become one himself, he knew how hard it was to start a business and the potential failure that could occur. After college, Lynch and his brother, Andrew, decided they wanted to start a business together. Lynch worked for Lehman Brothers Holdings and other financial institutions while Andrew worked for a logistics company.

They were dissatisfied with the quality of service that was being delivered to the customer and felt they could do it better. Lynch suggested that he, Andrew and two other founding members start their own logistics company. While Andrew and the two other gentlemen knew how to execute on the day-to-day operations of a logistics company, Lynch could focus on the financial and strategy aspect of the business.

They launched the Columbus business in 2007, and for the first five years, Lynch had a day job. He traveled frequently and carried a portable printer with him to print checks for the business in the evening. During these early years of the company, he worked in the background managing the partnership, finances and legal aspects of the business. This continued until 2012 when he joined Zipline Logistics full-time as CEO.

Zipline is strategic with talent management and invests heavily in its team. Leadership 411 is an advanced leadership training program geared toward sales and senior positions while Emerging Leaders Group is for newer staff. Outside of the official leadership training programs, the company emphasizes career mentoring focused on coaching employees through various career topics.

Lynch also created an innovation lab, which was originally for employees to submit feedback for technology improvement. This has since expanded into process improvements with an overall goal to enhance productivity.

Get in touch with one of Zipline Logistics’ representatives through the form below or give us a call at 888.469.4754.

Shoutout to our friends @bohanalife for the #WFH s

Our office, like many of our partners across the n